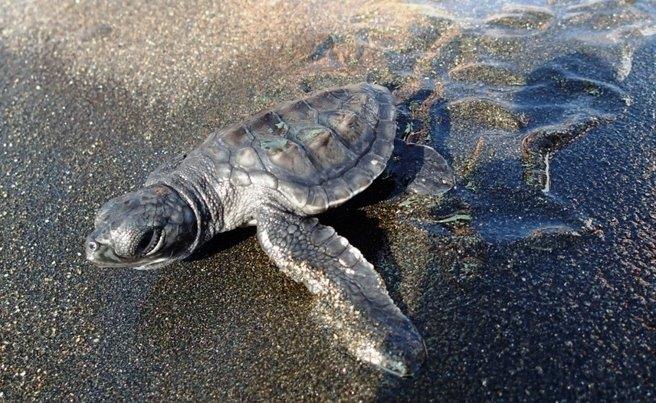 I enjoy travelling for the experiences I give my children. To see them wide eyed and able to have sensory encounters is remarkable for the influence it has on their confidence with animals, their imagination when drawing, telling stories and their understanding of the world around them.

They had very proudly and reverently each released a baby turtle.

After recently returning from an overseas holiday I had some niggling curiosity, not yet concern, about a turtle release we had participated in.

It’s not important where we did the release, I don’t want to shine a light on the resort or even the country. There are numerous countries world-wide that are offering tourists the opportunity to release a turtle from a beach.

I was curious about what I had been brought up to believe about turtles; that the mature females return to the beach where they were hatched to lay their eggs. If this beach was particularly rocky, or strewn with drunken tourists like some turtle release beaches are, what chance was there of a fully grown female turtle returning to this beach and successfully laying her eggs and what were the chances of survival for any hatchlings?

I mentioned earlier that I don’t want to shine a light on a particular resort or country. I have to make my point by shining a light somewhere though. Let’s start with myself, a tourist.

Over the years my family has experienced close encounters with orangutans, elephants, bears, lions, tigers and even attended a piranha feeding where my children were ushered to the front and invited to pour in a container of live goldfish for the piranha to shred before our eyes, for our …eco education.

I am laying myself wide open by declaring what my family has participated in. I’m not calling for a campaign to save the animals by not participating in eco-tourism activities. I’m not saying all experiences are wrong. I’m not saying eco-experiences can’t have great worth for knowledge, understanding and appreciation for life itself.

I am saying that we need to understand that what we are doing, in some instances, may be wrong.

I have been able to contact marine biologists specialising in turtles in Australia and around the world. I’m writing this article because it was at this point that my curiosity became concern.

I spoke with Dr Colin Limpus, the Chief Scientist for the Threatened Species Unit at the Department of Environment and Heritage Protection in Queensland.

Dr Limpus explained that these release programs contravene the biological rule of operation for hatchling turtles.

There can’t be many people who haven’t seen a wildlife documentary showing the plight of little turtles scuttling to the sea. The narrator’s voice informs us of the dreadful survival rate which always seems to be something like, “8 out of 10 hatchlings won’t make it to the water’s edge.” We flinch as various predators pluck them off the sand.

For many cultures, turtles and their eggs are traditional food. As suitable nesting areas continue to decrease this has created an egg poaching industry and black market for turtle eggs and meat. Removing the eggs to a hatchery is certainly reducing the poaching and black market activity.

One turtle release program website says that in the past two years they have taken 50,000 eggs from beach nests and have an 80% hatch and release rate.

So we think that by taking the eggs to a hatchery and releasing the hatchlings at the water’s edge, free from poaching and predation, that we are definitely increasing their rate of survival. It’s what makes this experience feel wonderful. We believe we are helping!

In my discussion with Dr Limpus he tells me how the hatchling comes out of the nest with an internalised yolk sack that it feeds off for energy over the first three or so days of its life. It’s like an inbuilt can of Red Bull, powering the little turtle down the beach and then swimming nonstop out to sea, maybe as far as 80km before it hits the currents, where it drifts and feeds on jellyfish and other little bits and pieces it finds on the seas highways.

With a scheduled tourist activity like releasing a turtle, the hatchlings are held for a few days to build up enough numbers for the booked participants. By the time they are released the effects of their little Red Bull have worn off and they no longer have the energy to swim the required distance offshore. This means they tend to stay close inshore where they are not exposed to the food they require and may be at increased risk of predation by fish and birds.

By now I was in touch with marine turtle experts from around the world, all responding to my curiosity with photos, essays and opinions.

From the University College of Cork in Ireland, Emeritus Professor John Davenport supported Dr Limpus’ comments, adding that his worldwide marine turtle studies show that most ecotourism interactions with turtles are poor and actually exploit them. Positively, he added that conservation education for children usually leads children to remain conservation conscious for life.

Dr Mark Hamann from James Cook University says that as a parent he understands the conflict between animal welfare, ecological benefit and education. Professor Hamann sees that clearly there are ecological concerns but rarely have the educational benefits of this interaction been examined.

For the Indian Ocean, there is a South-East Asian Marine Turtle Memorandum of Understanding. This is an intergovernmental agreement that aims to protect marine turtles and monitor their habitats.

The Coordinator in Thailand for this group, Douglas Hykle, described to me how a better starting point for our awareness and contribution to the survival of turtles should be with an activity that doesn’t depart from something that occurs naturally.

This is because any change is less likely to be as good as what nature intended. Maybe we should be keeping the nests intact and sitting quietly in our huddled masses as we watch the hatchlings emerge and begin their trek to the water.

My network of marine turtle experts all offered comments to a similar affect; if we teach our children to question and learn from these types of experiences then long term conservation might be in a better place. The resort where my family participated in a turtle release has a strong community focus, employing local people and supporting local conservation programs.  Just like the experts I’ve spoken to, the resort believes in the importance of children having educational conservation experiences.

The relationship we all have with wildlife has come a long way. We now all agree that you can’t have a circus anymore with bears on bikes and whips cracking to goad lions to jump through fiery hoops.

We need to learn more about how we can best have an experience with a baby turtle that is meaningful to us, particularly our children, but more importantly doesn’t upset the balance of a process that’s been around a lot longer than we have.