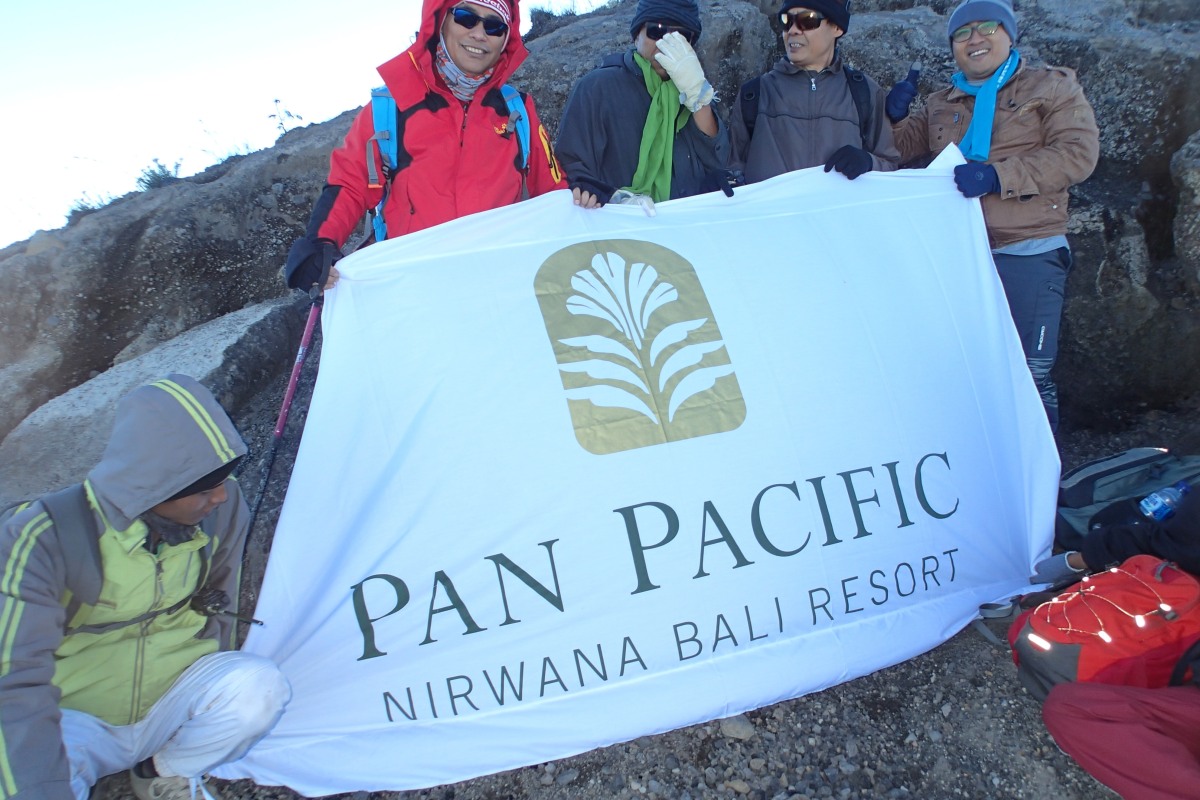 Written for and published by Pan Pacific Nirwana.

Agung…again. In 2013 I wrote an article about climbing Mount Agung, an active volcano in Bali.

I began that account by making a statement about my style of family holiday to Bali, “It has to be more than just waterslides and sitting at a swim up bar.”

In 2014 I found it. Pan Pacific Nirwana. The best resort slide in Bali, the best pools, the best staff, just the best of everything.

One afternoon I was talking to my new friend Romy Mansoer who worked at Pan Pacific Nirwana and we discuss the motivations required for getting fit. Romy was a fan of the golf buggy as a means of travelling around the resort and I advised him to start walking and have an aim. We decided he and other Pan Pacific Nirwana staff, should climb Mount Agung, visible from just about everywhere in Bali and regarded as a very spiritual location for the Balinese.

At 3031m, Mount Agung is high and a very challenging. The holiday paradise reputation that Bali has is deceptive when attempting this adventure. Many people don’t make the summit and even more, like me, require considerable work afterwards to repair weary muscles.

Romy never got around to taking up this challenge. Admirably, he gave up the golf buggy and walked his way to fitness but he also found new opportunities that took him away from Bali.

The challenge for the staff, however, remained. In 2015, I met with Wayan Yudiana, Director of Human Capital and Development at Pan Pacific Nirwana. ‘Yudi’ is also a very motivated leader of a fitness group and always looking for a challenge and normally singing as he does it.

So, in 2016, with five Pan Pacific Nirwana staff, two guides and one imbedded travel writer, we set out to climb Mount Agung.

With Yudi and I are Udiana the Employee Canteen Manager, Riadi the Human Capital Manager and Dastera the Housekeeping Manager. Our guides Wayan Yasa and Ketut Kari are younger than expected and live at the base of Mount Agung.

For me, I anguished at my personal fitness which was far less than when I had done this adventure three years earlier. I also had the fear of knowing what was ahead rather than apprehension and nervousness. I had written three years earlier that I was prepared physically and with good equipment but, “…unprepared for the fear as I peer through the darkness trying to judge just where to put my hands and place my feet…”

Even with our headlamps on it is possible that beyond your own light all around you is complete darkness.

Actually, that’s not entirely true. During our rest breaks one of the most enjoyable parts of this adventure is putting your backpack under your head and lying back and just looking up at more stars than you could ever imagine.

We sit and rest, pass boiled eggs and lollies and top up water bottles from our guides.

Our rest periods are not for long. We need to keep moving because it is more than the accomplishment of the ascent, it is the sunrise we are seeking. To be on the summit as the world begins to waken once more.

100m before the summit and nearly 7 hours since we commenced our climb, we are ready to make our final effort.

There’s a problem though. When I did this in 2013, it was calm, it was peaceful and there was nothing to distract us from focusing on maintaining your balance on a very narrow path to the summit. On either side of this path are very steep slopes covered in fine pebbles and dust. Slipping here is not going to be very forgiving.

Our problem is the wind. The gusts are increasing in frequency and strength. While two of our group decide to remain in a small cave, the rest of our group make the climb.

On this part of the path, the surface is made up of soft stones that your boots can sink into with a bit of pushing. With the wind gusting unpredictably, there is a feeling that it wouldn’t take much to toss you from the path and we all dig our boots in with each step, trying to hold our ground while trying to move forward at the same time.

We reach the summit.

Three years ago my selfies show the pride I felt and I know I felt closer to those I had lost and felt a very spiritual connection to my achievement.

Standing on the summit on this occasion I had to marvel at the bravery of two of our members to remain 100m below us. To climb for so long but realise their limit was the conditions we were dealing with now took great strength of character.

We stand on the summit and group together for some photos, proving our accomplishment to the world. While we all want to make our way across the narrow ridge line to the western summit the wind makes our decision for us. It’s time to go down.

Before we go, we take a minute to look at the shadow of this mountain that is shown in the clouds behind us like an enormous pyramid.

For anyone who has climbed, trekked, crawled and embraced a mountain it’s at this moment that you realise the adventure is only half complete and in many ways, is even more difficult.

Weeks after this adventure, I still have black toes and I’m waiting for the nails to drop off. This was mainly because of the toes banging into my boots on the descent but not helped the following day when I saw Yudi and in a friendly embrace he trod on my sore toes.

Descents put a lot of pressure on knees and toes. Hot spots become blisters and muscles cry out for remedial creams and ointments. Finally, about 14 hours since we began, we are back. Beside the Besakih Temple I find a place to rest and enjoy removing my boots and allowing my feet to swell and distort.

I am proud I’ve done this again and proud to have been included with such a wonderful group.

We have shared stories and food together, sung songs and I was even invited to pray with them.

In 2013, my climbing party was a guide and a young American student. This time I feel a greater sense of accomplishment because I have been a part of group that has trained hard together to do this challenge and the reward is that feeling of teamwork from achieving a goal together.

Sometimes the challenge we seek is more than the end goal, it is working together along the way to encourage and make sure that everyone has an experience that is meaningful to them.